The Mazda 6 has been released back in 2012 and last year it received a rather large update. Even though the car has been around for only four years, Mazda already did three major updates with the last being the 2017 Mazda 6. The car received a lot of new features, especially in the safety department. The exterior did not change much but the new model is more luxurious and better to drive than ever before. In fact, the Mazda 6 remains one of the very few cars in its class to offer a manual which is saying something.

The 6 is currently one of the better selling cars in its class which is not an easy feat to achieve. You would think that the best car in its class is offering the most amount of power, the most efficient powertrain or the most luxurious interior. However, this is not really the case with the Mazda 6. In fact, it is the best car in its class simply because it is the best to drive by a really big margin. Mazda worked a lot to make the 6 handle well and it shows. The chassis is nearly perfect in terms of balance and it offers a lot of confidence. The suspension is somewhat stiff but this only improves the way it handles. Despite that, it doesn’t really suffer in terms of comfort which is quite amazing. The 2017 model will hit showrooms next month and the price will not change from the current car, at least for the basic models. 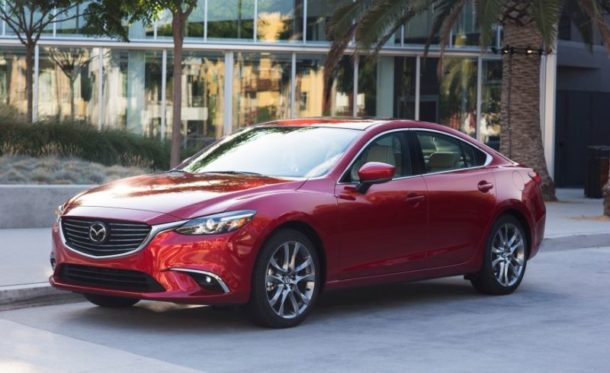 Great! The 2017 Mazda 6 didn’t change from the 2016 MY and that is perfectly fine. The front end features the same KODO design that all their other new cars have. This combines a trapezoidal front grille, swept back headlights which are part of the grille and a rather aggressive bumper with a small splitter. Even though their models might look very similar, Mazda did something right and the 6 has its own character which is quite hard in this day and age. The wagon, while not available in the US, is even better to look at with a shooting-break style that is reminiscent of the 1960s.

This is likely where the 2017 Mazda 6 received the most amount of attention. Here they worked to offer a better driving experience than before which was not easy. The first step to do that was installing Mazda’s G-Vectoring Control. This rather interestingly named feature will limit the torque of the engine when the steering wheel is off-center. This means that the car offers a much better steering response which is shockingly similar to that of a rear wheel drive car. With that, the 6 easily becomes the best car to drive with four doors at this price point. The cabin also received some new features such as the same steering wheel found on the CX-9 or a new color LCD screen for the instrument cluster. All these little things add up for a great experience all around.

The US model still gets the same 2.5 liter naturally aspirated inline 4 which churns out a mild 184 horsepower and 185 lb-ft of torque. Unfortunately at this point a turbocharged engine or even the new diesel are not available. Luckily though Mazda is offering a six speed manual as standard on certain models which is very good. The six speed automatic is not as fun but still one of the better in its class. The European model does get a smaller 2 liter engine as well as a 2.2 liter diesel but these remained unchanged from the 2016 version of the car.