2017 Kia Sportage is just around the corner, and we have already seen everything there is to be seen when it comes to the car. Compact crossover has been redesigned, but apart from that, there aren’t too many changes overall.

Much of changes have been incorporated from the larger Kia Sorento, but not the engines and trim levels. 2017 Kia Sportage should still be offered in three trims and with a duo of 4-cylinder engines. As before, the base unit will remain 2.4L naturally aspirated four with as much as 181 hp and 175 lb-ft of torque. 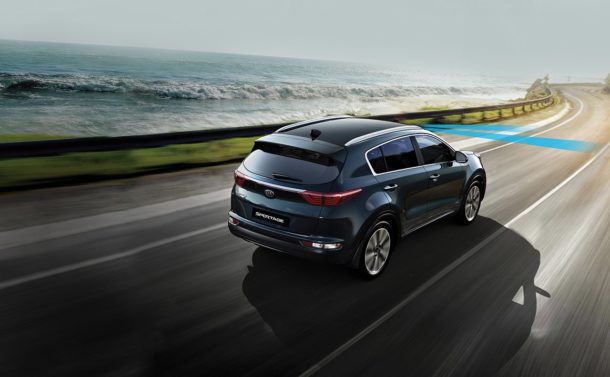 The optional engine which comes tied exclusively to top SX models is 2.0L turbo four making 241 hp and 260 lb-ft of torque. Both versions will continue with standard front-wheel drive and 6-speed automatic transmission. At the same time, all models will offer the optional all-wheel drive upgrade which locks center differential as well.

The fresh design has been made in correspondence with the larger Sorento. That way, 2017 Kia Sportage has a new, more rounded off the grille, sharper headlights, larger foglight flanks and deeper creases in its midsection. However, this doesn’t mean that it’s as big as its mid-size sibling. In fact, Sportage has remained a compact car with the same problems in interior space department as before. 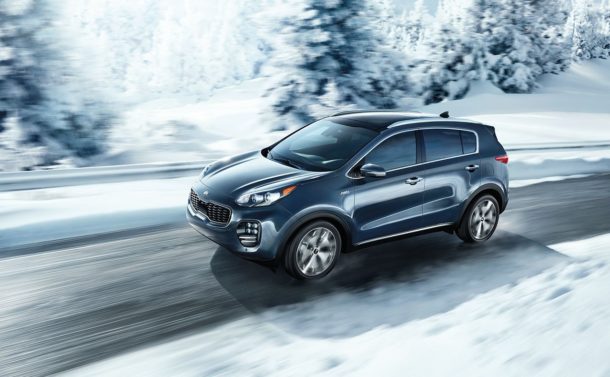 Speaking of the interior, Sportage has been given all new cabin. While there are no significant changes in dimensions, there certainly are ones in overall design. We have to say that this part of the car takes the biscuit. The previous generation of Sportage was handsome on the outside, but 2017 Kia Sportage is now lovely on the inside as well.

The new dashboard has been split into halves, with upper one focusing on touch screen infotainment, and lower one housing all of the controls. Apart from that, the cabin doesn’t look cheap and plasticky anymore – at least not to the extent it did before. Bluetooth and USB ports will still be offered from the get-go, and hopefully, audio display will be too. 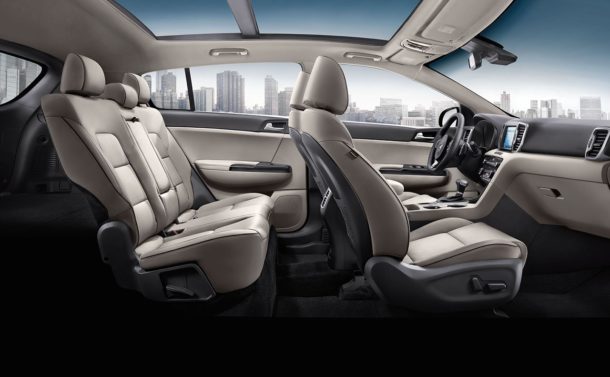 Larger touch screen unit should come with navigation and voice controls bundled in the UVO package, and so should Sportage’s advanced electronic safety systems. Speaking of which, the new host of safety equipment will now include blind-spot monitors, forward collision warning, lane departure warning, rearview camera, and parking assist. Most of this, however, will have to be ordered separately with new 8-inch touch screen display.

Koreans are saying that fuel efficiency is up for promotion this year as well. Official numbers won’t come out for some time, but figures then, should be better than 21/28 mpg with normally aspirated, and 20/26 mpg with the turbo powertrain. Prices will likely rise by a few percents, and expect entry-level models to cost at least $23,000. At the same time, top grades will likely start somewhere north of $30,000. 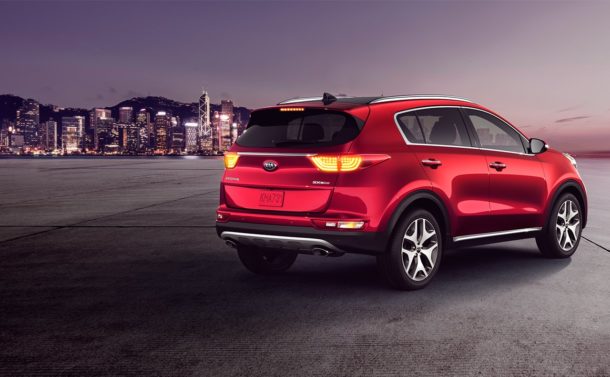 2017 Kia Sportage fixes some of its predecessor’s, 2016 Kia Sportage, shortcomings – especially in the interior design department. However, the growth of 1.6 inches in length isn’t really sufficient to fix the lack of legroom at the back, and better fuel economy ratings are yet to be confirmed by the EPA.

2017 Kia Sportage fixes some of its predecessor's shortcomings – especially in the interior design department. However, the growth of 1.6 inches in length isn’t really sufficient to fix the lack of legroom at the back, and better fuel economy ratings are yet to be confirmed by the EPA.

Even the naïve man would, quite easily, come to the conclusion that from the 5.0l V8 engine option, you can …