In the past few years the rumors about a new Supra started to get a lot closer to the truth than many of us thought. Not long after that Japanese carmaker actually released a statement which said that the 2018 Toyota Supra will share its chassis with the new BMW Z5. This was a rather interesting piece of information because it meant that the car was going to at least handle beautifully, especially when we look at BMW’s current roster. Soon after that spy shots of prototypes have been leaked on the internet and we even received information from the inside.

Like all the other Supra cars before it, the 2018 Toyota Supra is going to be a two-door coupe. The car will be able to accommodate up to two passengers and their luggage. So far it seems that the engine will be mounted in the front, but behind the front axle. This should allow Toyota for a 50:50 weight distribution or something really close to that. The platform itself is a rear wheel drive chassis which has the multi-link rear suspension from the M3 or M4. The front suspension has a similar setup to that in the 5 Series and BMW made it to accommodate hybrid powertrains and all wheel drive. This is great because so far it seems that the upcoming Supra might just be a hybrid. 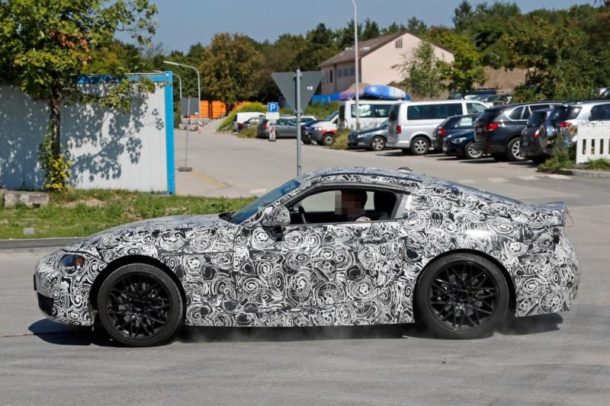 Even though so far Toyota hasn’t actually released any official information, they did release a few concepts through the years. The 2007 FT-HS was the original one which later evolved into the FT-1. This one was supposed to become the Supra but it seems its design was just too futuristic for its time. Now that long ago the Supra has been spied wearing quite a bit of camouflage and the end result might surprise us. For starters, it looks nothing like the FT-1 but it does share some traits with the FT-HS. Expect it to have a similar front end design with design cues from the FT-86. The car is also as low as the FT-1 but it is both narrower and shorter, so it won’t look as aggressive.

We did say that the car will be able to carry up to two people. The design will more than likely incorporate a lift-gate design at the back which will be similar to the Mark4 Supra which will open up the large trunk. So far it seems that the interior might in fact borrow parts from BMW. This has not been confirmed but all prototypes had a BMW dashboard with a BMW steering wheel that had the badge removed.

The engine of new Supra

The most important part of the Supra has always been the engine and this will likely be the case with the 2018 Toyota Supra as well. There have been quite a few rumors lately but it seems that the car will boast a Lexus powertrain. Not that long ago Lexus announced a new 3 liter twin-turbocharged V6 good for more than 400 horsepower and 300 lb-ft of torque. The Supra, unlike the Z5, is also expected to be a hybrid. So far it looks that the car will be rear wheel drive with the help of a BMW automatic. A manual is still a possibility at this point. The front wheels will likely be powered by two individual electric motors which should allow the Supra to at least match the performance of some more expensive cars. There is still no word on the pricing. Some inside sources suggested $50,000 but this might be a bit too low for what the car will boast. We expect something in the neighborhood of $60,000, especially considering the overall package.