Even though the RAM 1500 is the only truck in its class with a diesel, because it has been around since 2009 it can’t really keep up with the competition. The truck is worse than the F-150 in pretty much every measurable way and it is not as refined as the Silverado. After nearly a decade, it will finally receive an update with the 2018 RAM 1500. This is going to be an all new model with the code-name “DT”. The new truck will have quite a few lightweight parts over the original, more power, it will be more efficient and it will look like a new truck.

Well, RAM hasn’t actually said anything about it. However, at a dealer’s meeting, the future 1500 has been showcased alongside a few other products of the FCA group. The new model features a new design and so far it seems to be sharing the lightweight construction with the Wrangler but more on that later. The truck is expected to be released next year while its market availability might start in the early 2018. The price might increase slightly but a base model is still going to cost well under $30,000. 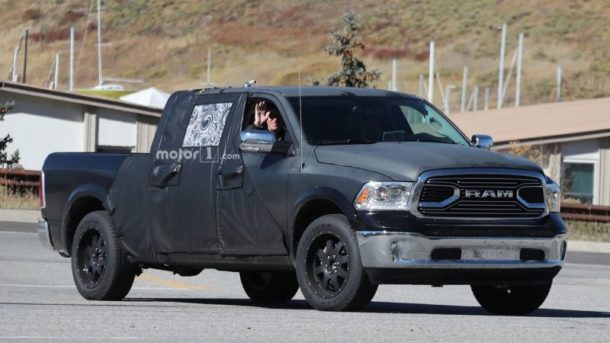 The engine and Transmission

While the FCA group is expected to discontinue most of their large V6 and V8 engines in their family cars, this will not be the case for the 2018 RAM 1500. The new model should get a completely new set of engines that will more than likely be comprised of revised older units. The base model is still likely going to have a 3.6 liter naturally aspirated V6 but this time around with well over 300 horsepower and 270 lb-ft of torque. Some also suggested that thanks to the massive weight loss, the new 1500 could get a new 2 liter turbocharged petrol engine with around 300 horsepower and 300 lb-ft of torque. This would easily become one of the best small engines in its class.

Further up the range the 5.7 liter V8 unit should be carried over, but this time around it may offer over 410 lb-ft of torque and 400 horsepower. The 3 liter EcoDiesel on the other hand is expected to carry on unchanged. The big news will likely come in the form of a new turbocharged gas engine, more exactly a smaller displacement V6. This might be a 3 liter unit with around 350 to 400 horsepower, enough to replace the V8 for those willing to pay the price premium. 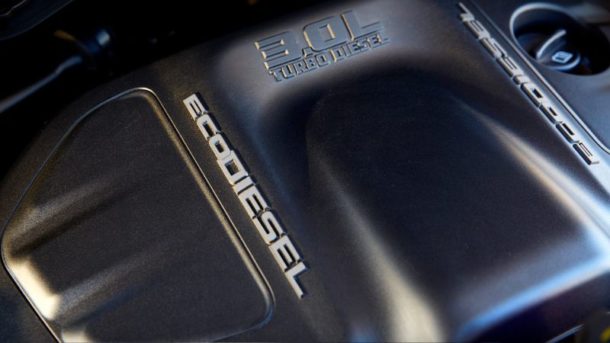 The build and design changes

The upcoming 2018 RAM 1500 will definitely use lightweight materials. This has been confirmed by FCA’s CEO a while back. However, he also said that steel will not be abandoned. This most likely means a steel cab and likely doors with aluminum fenders, hood and bed. All of these should allow for a weight drop larger than 400 pounds with ease. The look of the truck will become a bit more aggressive. This has been seen in the brochure dealers received. In the front the cross-hair grille is still there but the headlights to get a lot narrower. The hood also seems noticeably lower than before while the truck does seem to be wider.

Some of the test mules showed parts borrowed from FCA’s other products such as the Chrysler Pacifica. The production model is likely going to keep this steering wheel because it enables some new functions for Dodge’s new infotainment system which can be seen across all new FCA Group cars. On top of that, the RAM will also get a new cab option which will offer significantly more room for the rear passengers as well as more storage space than your usual double-cab. 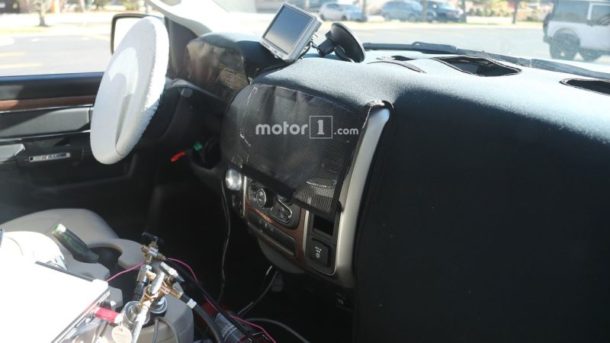